Something I believe so very strongly is that we were each uniquely created to do the most spectacular and amazing things with our lives. The problem lies in the fact that most of us just don’t believe that we are good enough, or that we deserve it. In essence, each one of us is our own worst enemy and the only thing standing in our way of living out a powerful, exciting life.

Why do you believe greatness belongs only to Oprah, Deepak Chopra, Michael Phelps or other well known people? You were uniquely created, as were they, with your own special gifts and talents. The only thing stopping you from being all that you were created to be is YOU. We all have insecurities about ourselves but the key is to move forward even when they are trying to hold you back.

As much as I truly believe that I was created to do great things, I struggle in my own insecurities and humbleness just like everyone else does. The only difference is that I don’t let those insecurities paralyze or stop me from moving forward. And as much as I don’t see my own greatness, others telling me how much I have helped them or impacted their lives in a positive way gives me the courage to keep going for it. 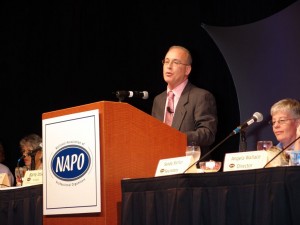 I’ll never forget the first time I heard Barry Izsak, owner of Arranging it All organizing services and former President of the National Association of Professional Organizers, speak at the very first national conference I ever attended in 2007 when my business was only 2 months old. He was standing at the podium before 7000 attendees and he was encouraging us as a group to believe in our dreams, believe that they can be a reality and to go for it. I remember that moment so clearly because I felt so inspired, empowered and even more motivated than I thought was humanly possible after hearing his presentation. I was in awe of him and everything he said.

Fast forward 5 years to 2012 when I launched The Stuff Stop, a FREE nationwide website that helps you match up your unwanted stuff with people in need by connecting you with ministries and charities in your area that will take your unwanted stuff to help others. I’ll never forget the conversation I had with Barry when I reached out to professional organizers nationwide about advertising on The Stuff Stop. He said (and I can quote him since I’ll save the email forever!) “I commend you on this wonderful endeavor and my hat is off to you! I admire what you are doing and I would be honored to be your first advertiser in Texas. I am thrilled to support you and the great work that you’re doing with The Stuff Stop! Keep up the good work. I’m so proud of you, Sue!!!! You are truly a NAPO success story if there ever was one!!!!”

Can you imagine what a “full circle moment” that was for me? To have someone that I remember admiring so clearly now be telling me that they admired me and what I was doing. It left me speechless. I hope that by sharing this story, you will begin to understand and believe that you have the power within yourself to do great things too!