What about the people that are supposed to be there in life for you and they are not? What about the contractor that you paid to make repairs who did a shoddy job? Or worse yet, took your money and ran with it? What about the person that cuts you off in traffic? Do you notice these people’s actions?

I’m going to wager that the majority of us notice the second set of examples more frequently than we do the first. We’re burning up the phone lines complaining (or blaring or horns!) when we feel like people have dropped the ball or treated us unfairly. But how often do we pick up the phone to tell a friend or family member how much they mean to us? What about calling to compliment the people or service providers that just show up and do what they have promised to do? 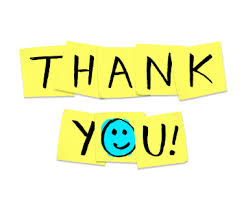 I’ll admit, I’m the first one to call and complain if something goes wrong. But, I’m also the first one to call when something goes right. I notice and acknowledge whenever someone does a great job. Yesterday, I received yet another sales call on my business line. These calls drive me CRAZY and distract me from whatever I’m trying to focus on. And the caller is usually rude and sounds like a robot with a prerecorded message. While I used to automatically just hang up on these callers in the past, lately I have been trying to remind myself that they are just people doing their job. A job they probably hate, just like I was. So I’ve made a conscientious change and I now sit through their spiels and then I politely decline whatever it is they are selling. But back to the sales call I received yesterday. The woman that called was so polite and genuine that I was highly impressed. I still politely declined what she was selling, but then I took a moment to thank her for her great approach and told her how much I appreciated it.

Well, I’ve been prompted the last few days to call my trash company and tell them how much I appreciate the guys that take my yard waste. They show up every week just like they are supposed to. Usually they have come and gone before I even wake up. The times I have seen them taking the yard waste, they always pick up any grass that may have fallen out of a bag that ripped as they pick it up. It’s those little, thoughtful things that usually go unnoticed. I kept meaning to call but kept forgetting. When I was prompted out of nowhere again today to make the call, I knew I couldn’t put it off one more minute.

I’ve learned that when I am prompted like that to do something, especially over and over, there is a reason for it. And it’s my job to act on it. I’ve learned that in those instances, that is when God is speaking to me. Now, I don’t know the first thing about the 2 guys that pick up my yard waste. But my sense is that one or both of them must be having a tough time right now or just need a little pick me up. I’ll never know how my phone call impacted their lives, or if it made a significant difference at all. But what I do know is that it was important that I make that call. Who can you call and thank today? What GOOD thing can you focus on today rather than focusing on a negative thing?