There’s always a rainbow at the end of the storm. Many times we wonder when it will stop storming. We try to rush the storm past us because it seems like it’s never going to end. And then, finally one day, there it is – a rainbow.

12 years ago today, and 2 weeks after his 39th birthday, my younger brother Mike died after a very short battle with leukemia. Mike and I were very, very close. He actually lived with me for the last year or so of his life. Because of the wonderful connection we had, it seemed fitting to me that I was a perfect match to be his bone marrow donor. In non-technical terms, when you’re a bone marrow donor, they draw out your blood, spin “the life” out of it and then put what’s left back in your body. The bone marrow recipient gets the “life blood”.

It’s an all-day process which leaves the donor completely (& literally) drained at the end of the day. Since my veins tend to collapse, roll and do lots of other creative things, the doctors decided it would be best for me to have a catheter put in my chest for the procedure. Unfortunately the bone marrow transplant did not save his life and he died not too long after it. Mike’s death took a tremendous toll on me. While I was driving home from the hospital the day he died, I screamed so loud and for so long in between sobbing that I hyperventilated and had to pull over. Fortunately my other brother wasn’t far behind me and he pulled over and talked me off the ledge.

About a year after Mike died, the scar from the catheter they used for the bone marrow transplant was going away and I didn’t want it to go away. It was all that I had left of him! I was panicky. I couldn’t lose that last piece of him! So, although I am not a tattoo lover, I got a very small tattoo of two connected hearts to permanently mark where the scar is (1 representing Mike, 1 representing me). I had the tattoo placed so that the scar is right in the middle, between where the two hearts meet. 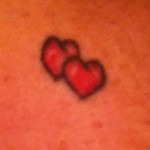 Every year, year after year, on June 10th, I am reminded of Mike, his death and how much I miss him. I’m sad for him, I’m sad for his children (one of which has died tragically since Mike’s death) and I’m sad for my children. Every year June 10th was clouded in storms. That is until June 10, 2011. God sent my first little grand baby, Raelyn Grace to us that day. She was the rainbow at the end of my storm. Because of His grace, he had taken a tragic day and turned it into a day of celebration. Raelyn represented hope, a new life and a happy focus for that day. I can’t even begin to articulate the amount of joy this one little soul has brought into my life! So today, we celebrate our little rainbow’s 3rd birthday! 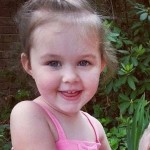