In April 2007, 2 months after my divorce was final, I hopped on a plane all by myself and headed to the National Association of Professional Organizers’ annual conference in Minnesota. I had never traveled alone in my life, much less left my kids behind as I traveled. I had just started my business and had never been to the conference, so I didn’t know a soul out of the 7000 people that were expected to be there. I also have an extreme claustrophobic reaction to flying but there was no stopping me!

All of the wonderful people I met there were in awe and amazed that I would be brave enough to do that. It’s funny, I didn’t look at it that way. I just looked at it all as a matter of fact decision. If I was going to be a professional organizer, this is a step I would need to take. I’ve always been the kind of person that just does what I am supposed to do, or need to do, to take me to where I am headed regardless of my own insecurities or whatever is holding me back. This may be a natural born quality, or it may be a quality that I learned early on because I have never had a very good support system to help me, including my parents.

Nonetheless, one of the keynote speakers there was Jack Canfield, author of the Chicken Soup for the Soul. To be honest, I wasn’t very familiar with him or his books, but his presentation was amazing and focused on how people should take all of the risks I described in the first two paragraphs! In humbleness, and with all due respect to Mr Canfield, the reason his presentation was so powerful for me was because I already think and act exactly like he was telling people to think and act. I was so anxious to let him know that I had lived my life in the exact fashion he described and that this approach really does work, that I bought his book and waited in line to meet him. 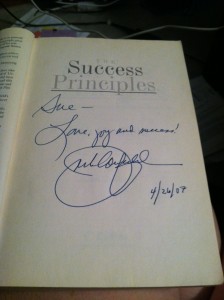 His presentation was the buzz for the remainder of the conference. People were motivated by all of the wonderful things he said and all of the inspiration he gave them. They really were impressed by what he had to say. I began to realize that if I already knew all of the secrets and tips he was sharing, that I must be a little bit special myself. For those of you that don’t know, Jack Canfield is a very, very successful business person and is a millionaire many times over. He has inspired many, many everyday people as well as many influential people.

This chance meeting is where the seed was planted that I had knowledge and information that I could use to help people live their best lives – and to let them know that they deserve it. And this is where I began to realize how many times people had told me that I had inspired them with my actions. Over the years since then, I’ve learned a lot more about myself and this unique quality. And that is why I was able to understand that I was to use this momentous decision in my life to motivate others to not let their own fears or insecurities stop them from being all they were created to be.

SIDE NOTE: I submitted a snippet of my Modern Day Noah story to Jack Canfield for consideration in his new book a couple of years ago but never heard anything back.