Do you spend your days focused on and consumed by your problems? Do you wonder why bad things only happen to you? If you do, I can teach you a little trick that will help you start to forget your problems. It will help you begin to notice how lucky and blessed you really are instead. Ready to hear what the secret is?

Take your eyes off yourself and focus instead on helping someone else.

Did you know that whatever we focus our attention on consumes us and gets bigger? If you’re always thinking about your problems, they take full reign of your attention – front and center all day long. The bigger your focus on them, the more they make you feel slighted, mistreated and eventually you are consumed with self-pity.

When you begin to focus instead on what you have in relation to others less fortunate than you, it puts everything in perspective. I remember back in the really, really lean times when as a single mother, even though I worked full time, I was struggling to put food on my own table. I worked in downtown St Louis, which is somewhere I would never choose to hang out by choice. Every week when I got paid I would literally have just a few dollars left over after paying the bills that had to be paid that week. Without fail, I would walk out the doors on payday and come across someone on the street begging for money. Invariably, I would give them 2 of the 3 dollars I had to my name. 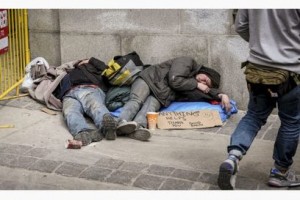 Not only have I been the giver, I have found myself on the receiving end of a good deed and it feels amazing! During those same lean years that I was “foolishly” giving 2 of my 3 dollars to homeless people, I was reaching out to churches and other places trying to get help paying my own bills so my power wouldn’t be shut off, or so that I could feed my kids. I’ll never forget that a young couple with a small child “adopted” my kids and I for Christmas. They brought presents for my girls and a bottle of perfume called HOPE for me. They told me the perfume was not intended for me to wear so much as it was to serve as a reminder that there is always hope. They also brought each of my daughters Happy Meals from McDonald’s which was a big treat because we seldom had the opportunity to eat out during those days.

The fact that these people chose to think of others rather than themselves during the holidays was such a complete blessing to me and left a profound impact on my life. But the thing that stands out to me the most in their act of generosity was that they were trying to teach their 6 or 7 year-old daughter to always think of others. What makes this even more amazing was that their daughter did not have a hand. She only had a prosthetic hook for her hand. Talk about someone not focusing on their own problems!