At the end of January, I blogged about the book Following God One Yes at a Time by Connie Cavanaugh and how reading that book was the final confirmation I needed to make the big leap and quit my “real” job.

You’ll never believe the impact that one little blog post made. It’s amazing all of the crazy things that God will do in your life if you just show up for what you believe he’s called you to do. He continues to blow my mind so often.

After writing the post, I emailed Connie Cavanaugh just to let her know that I had blogged about her book and the impact it had on my life. Having run a business for the past 7 years, I’ve learned that it’s important to let other businesses know when you’re promoting them for many reasons – one of which is that by promoting them, they usually end up promoting you back.

I honestly didn’t even know if Connie would even see my email but I sent it any way. At the least, I hoped that she would see my email so she’d know that her words and her story had impacted my life. And at the very most, I had hoped that she would like my blog post enough that she might share it on her social media pages, which then of course would help to get the word out about Modern Day Noah.

Of course, God had much bigger plans than that! I received an almost immediate response to my email from Connie. After emailing back and forth a couple of times, we decided that we needed more time to talk. So we scheduled a few hours to talk a couple of days in a row. We talked almost 6 hours within 2 days! What we learned right away is that we’re soul sisters. You know those people that you just meet but you feel like you’ve known them your whole life? That’s who we are.

As if that isn’t crazy enough in itself, I’ve blogged about how I believe God wants me to write a book and be a motivational speaker (even though the thought of public speaking paralyzes me). Well guess what Connie Cavanaugh does? She’s an author and travels the world speaking! She does exactly what God has shown me in several visions that he wants for me. He never fails to put what you need to follow His plans for your life right in front of you if you’re open to it.

I’m following God strictly in faith, and somewhat blindly. I don’t know the first thing about writing and publishing a book. I don’t know the first thing about public speaking, motivational speaking or getting clear on exactly what your message is – but my new soul sister and mentor knows all of that. God has connected us so that she can help me down the path that He has for me. I am confident too that in some way He will use me to help her down the path He has for her as well.

As I begin to re-emerge after crashing and burning from overworking for so long, and after taking some time off to rest, take care of myself and hang out with my kids and grandchildren, I’ve been slowly and methodically going through every aspect of my own life and business and analyzing everything I do.

I think this process is a natural thing for us “organizer” types. We’re always looking for ways to de-clutter our lives of things or habits that no longer serve us so we can focus on what’s most important. And we’re always trying to figure out how to do things more efficiently. It feels so good to have the time to do this for myself since I feel like I’ve been flying by the seat of my pants since the day I started my business because there was never enough time to do this for myself.

As I work through this process, the emerging trend and overarching theme for me seems to be that things really just aren’t as serious as I’ve made them out to be. So many rules I had in place for Simplified Living Solutions were so uptight, rigid and serious  – when in fact, they really didn’t need to be. 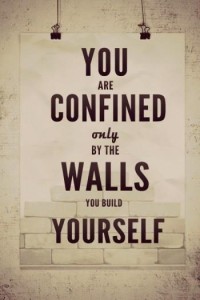 It was me that made the fact that I had another “real” job in addition to my organizing business such a big deal and so serious in my mind. I’m the one that created the secrecy and shame around that. No one else cared. Why would they? When I hire someone to help me with something, all I really care about is that they know what they are doing and they can help me. It’s so clear to me now that that is really all that was probably important to my clients as well. But I made it all so darn serious!

As I continue making changes and adjustments where I see this theme of unnecessary seriousness while reviewing the habits and things in both my personal and business life, I can feel an overall shift in me. I’m more relaxed. I feel lighter. In short, I feel more open to just be me. I think many of the serious rules or beliefs I had were because I felt like I had to prove I was a real professional organizer and a real business owner. I now realize that the only person I was trying to prove that to in the end was myself. It’s almost comical to me now when I look back over everything I put myself through to prove it when there was nothing to prove – I really am a professional organizer and I really do own and run a successful organizing business.

We’re all our own worst enemies, aren’t we? I see this everyday in our clients and everyone I come in contact with. We all think we’re failures and will never amount to anything. It’s funny how I can continually see the good in everyone and can encourage them to believe in themselves and stop beating up on themselves. It’s so obvious to me the damage they are doing to themselves when they tell themselves over and over what a loser they are. Yet, I face those very same challenges. Life is funny, isn’t it?